YOUR ROOF AND THE WEIGHT OF WINTER SNOW 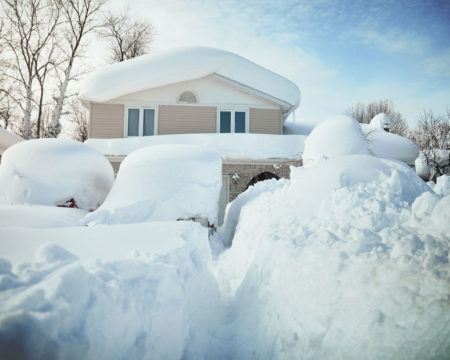 The snow accumulates on inclined roof surfaces of up to 60°, and above this value, it typically slips down. Therefore, the slope of the roof is inversely proportional to the size of the snow layer that is deposited on the roof. The steeper the roof, the more resistant the cover, precisely because ice and snow cannot accumulate in large quantities and destroy it.

The shape of a sloped roof should be as simple as possible, to be effective in snowy conditions, because a complex shape has many angles formed at the intersection of two slopes, which represent areas where the snow will accumulate excessively, having the potential to destroy the roof`s structure.

A layer of 20 cm of snow can put an additional load of approximately 22 kg /sqm on the roof.

Although, at first sight, many would be tempted to believe that the weight of the snow cannot cause problems, the reality proves that an incorrect sizing of the roof structure and the use of the poor quality materials have led to damage of the covers because the weight of the winter snow. Degradation of the roof structure can lead to its collapse, causing serious damage to the entire building.

This is the reason why the roofers in Lincoln recommend clearing the snow of the roof or installing de-icing systems that will melt it, preventing accumulations.